Coffee tables are at the center of most living rooms. This suggests that the table brings the focal point down to a lower level of the room. Some coffee tables serve as a place to set drinks, tv remotes, and half-read magazines, while others can become full fledge art installations. For that to happen, tabletop decoration has to be integrated into the space, carrying the design through that lower level of activity in the room. To help with your next coffee table design endeavor, here are 6 different styling tips designers use when choosing décor.

When photographers are looking through their lens, evaluating the image inside of their field of view, some use a technique called the rule of thirds. This technique involves mentally splitting the view into a grid system, where the main focal point is not in the center grid, creating a more natural looking image that is pleasing to the eye. The rule of thirds can be used when placing and styling a coffee table. Symmetrical coffee tables can provide balance and a sense of stability in a space but is not nearly as eye capturing as a table with a bunch of randomly (but thoughtfully) placed items.

Here you will see the most classic move in the book: a tray on a coffee table. Usually styled with a candle, some sort of greenery, and the occasional tv or fan remote: they keep everything in one central location. There is no risk of things being knocked off the edge, losing any coasters, and keeps the contents of the tabletop rather neat.

The coffee table is the center of a living space, and it is also at the center of the conversation. For that reason, you do not want any tall objects obstructing the view of those you may sit across from. Nothing sounds worse than having a simple conversation through a giant vase or bouquet of tall flowers. Low objects will help that. Not saying they have to be small, just not taller than a foot and a half, at most.

Going along with having lower objects on your coffee table, you also do not want every object to be on the same plane. For example, if you have a stack of books, you do not want a bowl the same height next to it. This can cause the table to look overcrowded and messy while also killing the neatly decorated look you were going for. Instead, maybe layer like the image below with three different visual layers.

Florals and greenery are a great way to bring life into a space, especially on a coffee table. Greenery can often be the organic addition in a space, or a bright pop of color from flowers at the center of a neutral-colored room. Whatever way you incorporate them, make sure you still pay attention to levels and symmetry; you don’t want anything too tall and making greenery the centerpiece of a coffee table counteracts the visual interest aspect every coffee table decorator should be going for.

As seen in the image below, this table has a combination of thoughtfully integrated color, metals, greenery, and geometry. The thing that sticks out about this particular image is the abstract-shaped sculpture, the textured tray, and the smoothness of the decorative books. These three particular objects work together to almost make your eye bounce from cluster to cluster of objects as they all offer a different idea of visual interest in the way these objects look or could feel when you touch them. A good combination of shapes and textures on a coffee table can be intriguing. 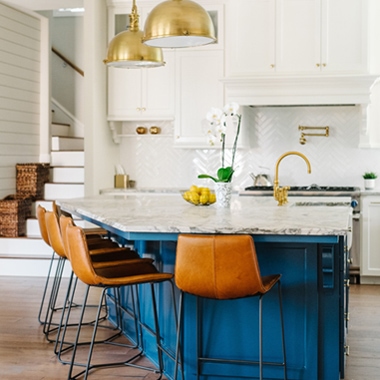